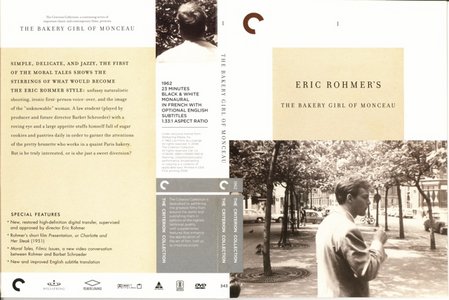 Eric Rhomer is a complete enigma for me. I can’t make him out, which inevitably makes him one of my favourite directors. No film maker is more ambiguous.  No film maker can slip in the wisp of wind between complete opposing view points with such a devils twinkle in the eye.

I think I have made a bit of an error with my viewing of the moral tales series. I have watched them “all wrong” and completely out-of-order. I raced for My Night With Maud first because I wanted to see it so badly. Then I saw Love in the Afternoon, which actually left me with a terrible uneasy feeling that Rhomer might just  be a prude with a fine aesthetic. 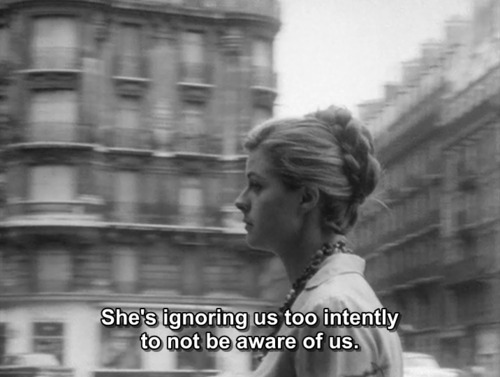 I think this was a bit of a blunder on my part, because I just watched The Bakery Girl of Monceau. This is the first film in the series and (lightning as FINALLY hit folks) it also sets up the moral tales that will follow it. Rhomer is a novelist  – was a novelist – and I wish I had realised this before. Seen as a series of short stories, the films come alive for me and I feel much more connected to the heart of what Rhomer is portraying. I am a writer, and I will tell you that the oder short stories appears in is important. Sometimes they can form an ongoing narrative that resembles a novel. This is the key (for me – I may be a little slower than everyone else, because I am the only one I know who couldn’t quite work Rhomer out) to understanding the Six Moral tales.

Barbet Schroeder plays an unnamed law student who has ‘fallen in love’ with a woman he sees on the street. This is a key theme in the moral tales, the mythologized enigma of the feminine always out of reach.  In this case he has chosen a woman he thinks suits him well.  She is sophisticated and has a look of wealth and art about her. he fantasizes that they will meet while being too timid to act and make it happen. One day he does bump into her, mostly by accident which he later credits with is own deliberate cleverness. He suggests to the woman (Sylvie her name is played by Michèle Girardon) that they have coffee.  She declines saying she has to go somewhere but she will see him another time. With that she acknowledges they always see each other on the street. 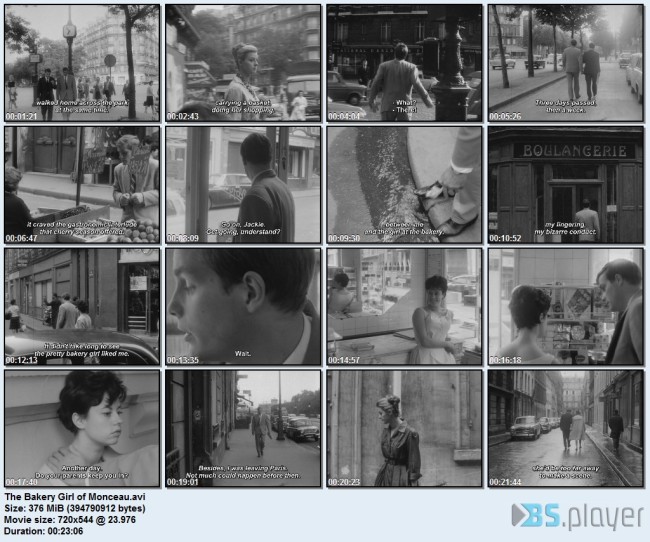 The young student falls immediately and completely into a fantasy about himself and Sylvie, even to the point of interpreting her inability to go out for coffee as a deliberate ploy to deepen her seduction of him.  he’s all but married her in his mind when the inevitable happens. He doesn’t see her again in the street.

Its exam time, but he must find Sylvie. he is desperate. He is so desperate that he forgoes his meal each day to wander the streets for exactly 20 minutes (he can’t go out for longer than this because he is studying and has decided to take revenge on Sylvie by working hard and not looking for her during those times)  expecting to bump into her and becoming more and more convinced she has run off and married someone else when she doesn’t show. Because he is not eating, he is hungry and starts to frequent a bakery to buy a sugar cookie on his walks searching for Sylvie.  Again, because he is angry with Sylvie and because he is bored, he decides to flirt and seduce the girl in the bakery. It becomes an issue of class that the student wants to openly seduce the bakery girl, for whom he has no respect. He couldn’t even approach Sylvie in the street for fear of showing her disrespect.  This class dichotomy is mirrored in the two female characters: the tall, blonde, and artistic Sylvie (Michèle Girardon) and the short, dark baker’s assistant Jacqueline (Claudine Soubrier).

Teh student basically (and very ruthlessly) begins a flirtatious seduction of the girl in the bakery.  this happens because Sylvie is absent – that is, he is no longer under her gaze.  Our man resents this and creates a flirtation with the girl (someone he would never be seen with) to ensure someone is looking at him. he looks more and more ridiculous as he buys more and more cake in order to be near a woman he doesn’t want, but wants the attention of. He then quite bullishly tries to seduce her, refusing to accept she may not want to be with him.   The scenes are similar to the seduction of Florence in Les Cousins that i recently reviewed, without Chabrol’s malice. 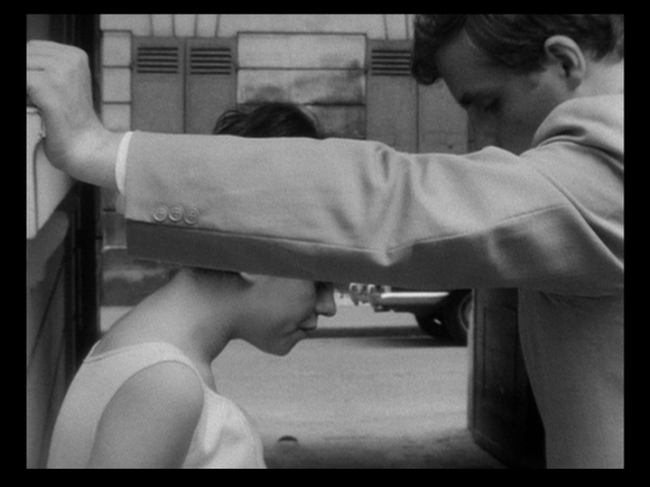 Sylvie, it turns out, lives opposite the bakery. Immobilized by a broken leg, she saw the student’s goings-on from her window—a neat example of the importance of the gaze in Rohmer’s films but also a mark of a certain level of opacity. The director refrains from revealing whether she understood his sadistic game with Jacqueline, or whether she thought he was simply looking for her. This ambiguity also characterizes the treatment of the protagonist, the perfect bourgeois cad seducing a working-class girl for his amusement, in the tradition of nineteenth-century literature. Rohmer here adopts the modernist posture of the new-wave filmmaker as “entomologist,” observing his wicked human specimen from an ironic, quasi-scientific distance—exposing him as conceited and arrogant with pronouncements such as, “What upset me was not that she liked me, but that she’d think there was any way I’d like her.” Yet Rohmer also narrates the tale through his hero’s visual point of view and oral narration. Jacqueline has our moral sympathy against the cad’s machinations, but our filmic identification is with him, the women never more than the objects of his desire.

But this is Rhomers little joke and the thing that got me all caught up. I’d never seen it before, but he is passing the moral judgement on his characters. His argument is that their morality is completely immoral.   As Rhomer said was the main plot of all the moral tales:

“While the narrator is looking for a woman, he meets another one, who occupies his affection until he finds the first woman again.” 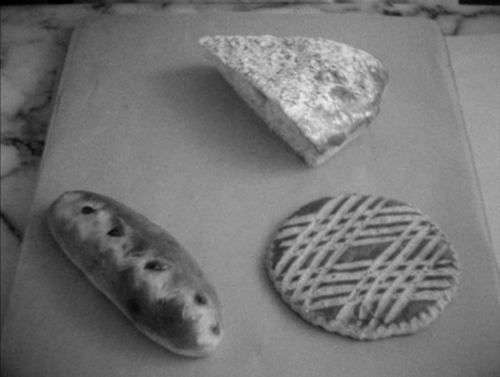 Rhomer gives us light, playful, happy delightful films that are the perfect mirror of bourgeois misogyny. I say mirror because part of his talent is to see ‘yourself’ in his characters. Our own Bourgeois longing to be judged and found wanting and thereby relieve our guilt. This is the very deep cleverness of these films.  It’s the reflection that tells us most about ourselves.  Not Rhomer. 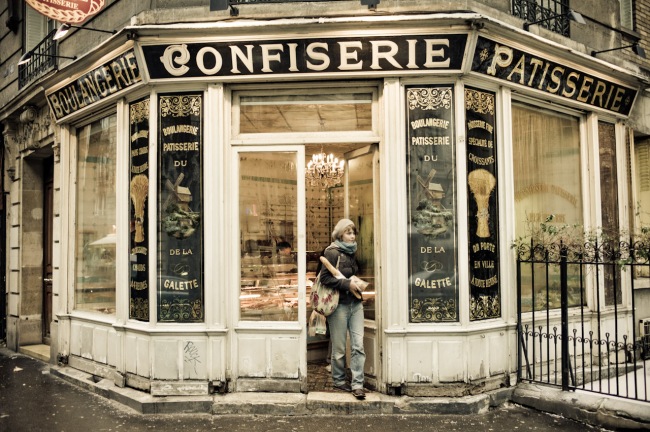 ← Les Cousins – Chabrol takes the French New Wave on a descent to Hell. Sonore – Oto: Every assertion automatically becomes its opposite. →