Home » Music Reviews » Henry Cow – In Praise of Learning: Art is not a mirror, it’s a hammer.

Henry Cow – In Praise of Learning: Art is not a mirror, it’s a hammer. 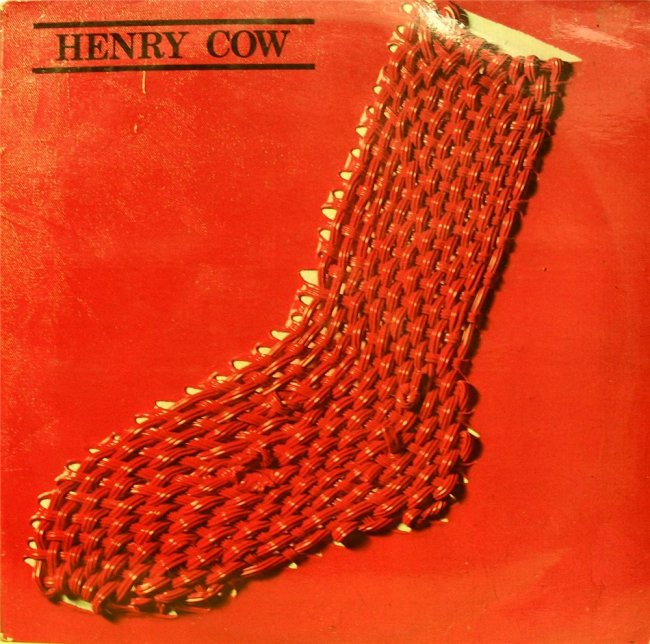 In Praise of Learning was Henry Cow’s most overtly political album. Printed on the back of the album cover is filmmaker John Grierson’s quote “Art is not a mirror – it is a hammer”, and the Tim Hodgkinson 16-minute composition, “Living in the Heart of the Beast” made explicit Henry Cow’s left-wing political leanings, with Dagmar Krause’s powerful voice adding a new dimension to their music. The album opener, “War” (Moore/Blegvad) had been recorded the previous year during the making of the first Slapp Happy/Henry Cow collaborative album,Desperate Straights (1975). “War” was covered by The Fall in 1993 for a BBC radio session and on Middle Class Revolt.

“Living in the Heart of the Beast” began as an unfinished instrumental that Hodgkinson presented to the group, which was cut up and performed live in 1974 with improvisational sections added. One such performance, Halsteren was recorded in Halsteren in September 1974, and appears in Volume 2: 1974–5 of The 40th Anniversary Henry Cow Box Set (2009). After the merger with Slapp Happy, Hodgkinson commissioned Blegvad to write lyrics for the piece for Krause to sing. But after several attempts, Blegvad admitted that he was “out of [his] depth”, and Hodgkinson wrote the lyrics himself. 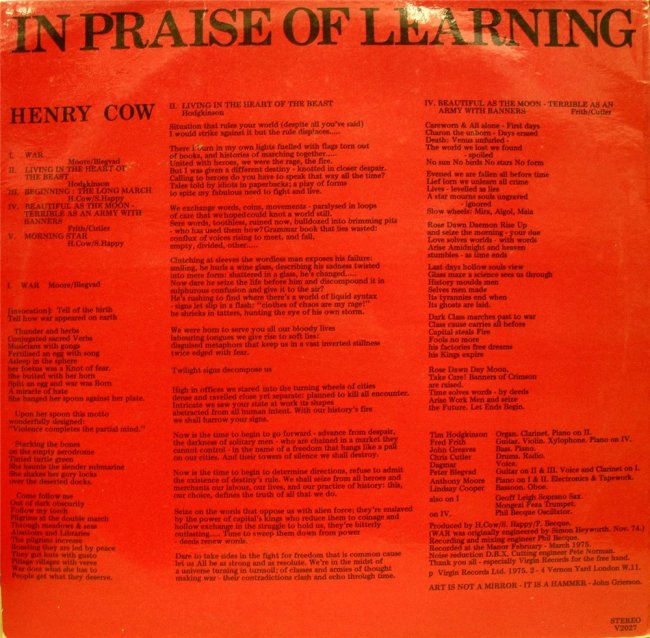 Chris Cutler’s lyrics on “Beautiful as the Moon – Terrible as an Army with Banners” were the first song texts he had written, and the song was the first writing collaboration between Cutler and Fred Frith that later grew into Art Bears. The song also became the longest lasting “building block” the band used in subsequent live performances.

This is not an easy album to get your head around. Its operatic rock wild – ness can grate (I think), but it is worth it. It’s one of those albums that grows on you. It does sound a LOT like a precursor to Art Bears. The album opens with War, a Slapp Happy song alluded to in the lyrics of A Worm Is At Work from Desperate Straights. Where Peter Blegvad’s lyrics had previously tended towards the whimsical, here he goes straight for the jugular and Dagmar spits them out with suitable venom – ‘Stacking the bones on the empty aerodrome’, ‘Shaking her gory locks over the deserted docks’ and ‘Violence completes the partial mind’. The whole thing is over in less than three fast and furious minutes.

This leads into the album’s centrepiece, Tim Hodgkinson’s remarkable Living In The Heart Of The Beast, a 15 minute call to arms set to complex and compelling music that comes from the same dark, haunted place as Magma or King Crimson circa Lark’s Tongues/Starless. Fred Frith plays lead guitar over a desolate soundscape while Dagmar intones doom laden lyrics. The interplay between Frith’s guitar and Dagmar’s voice in the first half of this composition is remarkable. After painting a picture of bleak desperation, the second half of the piece is rhythmic and focussed and the lyrics offer a way out – ‘Dare to take sides in the conflict that is common cause/Let us all be as strong and as resolute…’ . It says a lot about Henry Cow’s abilities as composers and performers that a revolutionary manifesto sung over complex music is also catchy and even hummable in places. The rhythm gradually speeds up as the piece draws to a conclusion, propelled by a wonderful bubbling and melodic bassline from John Greaves. This brought side 1 of the vinyl original to a close.

The second half of the album opened with Beginning: The Long March, a studio improvisation/sound collage of the type that Henry Cow included on the second half of Unrest. This is uneasy listening even by the standards of this album, but there is some angular, spiky beauty to be found if you presevere with it. The centrepiece of side 2 is Beautiful as the Moon, Terrible as an Army With Banners, written by Cutler (words) and Frith (music). In a sense, this is the first Art Bears song and is also the most accessible track on the album. The arangement is simple and uncluttered, with Dagmar singing over a piano/drums accompinament with only the most subtle of embellishments. Cutler’s drumming is economical and restrained but as restless and complex as ever, and this may be his finest moment on a Henry Cow studio album. The album closed with another dense improvisation, Morning Star, in a similar vein to Beginning:The Long March, again not for the faint hearted but worth grappling with. (I got help with this review from Prog Archives)

Personally, I love this stuff… just as I love Art Bears, but it’s really not for everyone.

← The Joe Harriott Quintet: Abstract – Free Jazz was never so free American Weekend : Waxahatchee – the dark night of the soul in song. →