Home » Film Reviews » Fox and his Friends – Fassbinder on sex

Fox and his Friends – Fassbinder on sex

Well!  What an interesting film!

I completed Fox and his Friends on the weekend – I’m on a bit of a Fassbinder ‘thing’ at the moment, having ADORED Beware of a Holy Whore a few weeks back.

This film is a little more difficult to dissect, even though Beware of a Holy Whore is a far more complex film. the reason for this is divided opinion on the film. There are very different attitudes to the film from the gay community than from the straight community. In the end, I would have to say the film is for the straight community, even though I’m not so sure Fassbinder would have liked that.

Franz Biberkopf (Fassbinder plays this role very well), is a sweet but unsophisticated working-class homosexual, who works in a carnival as “Fox, the Talking Head”. He finds himself without a job when his boyfriend, Klaus, the carnival owner, is arrested for tax fraud. Now jobless, Fox visits Hedwig, his sister, who likes to drink and is in no mood or situation to provide any help. After losing the remaining money that he had, Fox turns to tricks in order to buy the lottery ticket he is convinced will bring him his fortune. Cruising in a public restroom, Fox meets an older man, Max, a sophisticated antique art dealer, who is not willing to give Fox the small amount of money he needs. Undeterred, Fox stops at a flowers shop and swindles the ten marks he needs from an overweight gay florist who will appear throughout the film. With that money, Fox buys a lottery ticket as the newsagent’s is closing.

A month later Fox is at a party where Max introduces him to his cultivated gay friends. One of them, the handsome hypocritical Eugen shuns Fox for his proletarian manners, but quickly changes his mind when he learns that Fox has won 500,000 German marks at the lottery. The unscrupulous Eugen, immediately leaves aside his gorgeous boyfriend, Philip and with no effort entices the pudgy and unattractive Fox who he finds an easy prey. They spend the night at Eugen’s apartment starting a relationship. The next morning Philip, finds them together, however Eugen convinces Philip to step aside for sometime. Later, Fox and Eugen go to a working-class gay bar and then to a posh restaurant, where they meet Eugen’s two other friends. Eugen then takes Fox round his new factory. Later, Fox goes to a gay spa and talks to Max, who suggests investing in Eugen’s company. Fox then takes out 100,000 marks and gives them to Eugen; they go to the factory to tell Eugen’s father.

Eugen gets evicted from his apartment for moral reasons (two men living together); he suggests that Fox should buy his own apartment. They visit one and Fox buys it, then buys furniture from the older man for 80,000 marks. They go clothes-shopping at Eugen’s ex-boyfriend, Philip, and again Fox pays for it all. Later, they have lunch at Eugen’s parents’ and Fox has no table manners. He then signs a contract for the 100,000 loan, which he barely understands. Fox and Eugen go to the gay bar, and find that Klaus has been released from prison; Fox lends him 30,000 marks, and Eugen is jealous. At the apartment, they throw a party, during which Philip whispers to Max that he might be living there later;the party ends abruptly when Hedwig, drunk, makes a fuss. To iron out the argument, they decide to go on holiday. At the travel agent, Eugen decides on Marrakech, Morocco; Fox pays for it again. There, they pick up a local male prostitute (El Hedi ben Salem), and go to a restaurant with him; he is not let into the hotel because he is an Arab. The hotel assistant says, however, that they have male escorts specially for the hotel.

I won’t spoil the end of this film for you, because not everyone likes it when I post the endings to films. This has a very powerful ending and it can be spoilt by a full plot reveal.

That is – if it actually IS representative of a homosexual relationship.

When I read the criticisms from the gay community about this film, that all made a lot of sense to me as well, and I think had something to do with why it took a while for the film to grow on me. It is filled with homosexual stereotyping. We have bitter drag queens, chubby unrequited lovers and Us marines. There is even a torch singer in the bar who (tries to) look like Marlene Deitrich.

Then, the protagonist suffers at the hands of his lover, but there is very little prejudice experienced by those represented as being part of the community.  Even when Eugen is evicted for his lifestyle, he bounces back and just buys another apartment with Fox. There is no sign of bitterness at an act of hostility that he must get heartily sick of as it permeates every aspect of his life.  If you think about films  about women, or films about African Americans, the extent to which they suffer in response to their oppressors is clearly identified and included as an injustice. This seems a remarkably silly thing for Fassbinder to leave out, particularly given he must have experienced homosexual prejudice himself. In fact, when seen in tandem with Fox’s overall character it can provide som insight into why Fox is so gullible when a mate with the promise of a better life comes along. 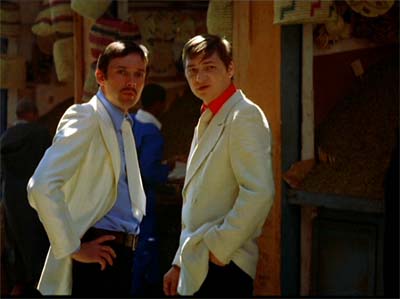 If one is able to see the film as a commentary on capitalism and relationships, then the film gets a lot more interesting.
The major theme of the film is the way in which money corrupts all relationships. Eugen exploits Fox’s feelings for him because Fox’s money can get him and his family out of their financial difficulties. Eugen also debases his relationship with Philip by rejecting him till his financial problems are solved. In the final scene, too, there is the mysterious conversation between Fox’s previous lover and his antique dealer friend about some financial transaction — this is never fully explained but simply reinforces Fassbinder’s point that in a bourgeois society all relationships have economic overtones. In many ways one has to see the film as a fable with Fox as the innocent abroad in an evil world in the tradition of Bunyan’s Pilgrim’s Progress, Voltaire’s Candide, and Dostoyevsky’s Prince Mishkin.

However to treat the film as though it were just a fable is to underestimate its complexity. There are many scenes in the film which acknowledge Fassbinder’s debt to Hollywood — such as the scene by the French windows with the lace curtains (with all its implications of property and exclusion) and the conversations in the car (creating an atmosphere of growing intimacy between two characters). These scenes are significant not only in a cinematic sense but also in a sense that they indicate the dependence of postwar West Germany on the USA. This can be further seen in the bar scene when Fox talks to the two GIs who are only interested in having drinks bought for them and fucks supplied for them. We are reminded that West Germany — like most of Western Europe — is a neo-colony of American imperialism. The lack of choice that Fox has in most of his relationships is as limited as the choice that most Western Europeans have over the economic destiny of the countries they live in. Lest this be seen as crude European nationalism, the point is further developed in the scenes in Morocco. Fox, the innocent, and Eugen, the symbol of a European bourgeoisie dying in the face of American domination, are only too ready to become the exploiters in relation to a man from a less developed country. Relationships are more than just a matter of good individuals and bad individuals — they are a clear reflection of the economic structure of a society and are no doubt intended here to be seen as an allegory of such.

People in this film are purchased and are able to be purchased. Money is talked about constantly and Fox wins the lottery – the ultimate sign of the poor mans desire for wealth. Interestingly many people who win the lottery find themselves penniless only a few years later. Fassbinder as Fox cries out that people only want him for his money and he is more lonely at the end when he has been rich than at the beginning when he never knew the pain of wealth. 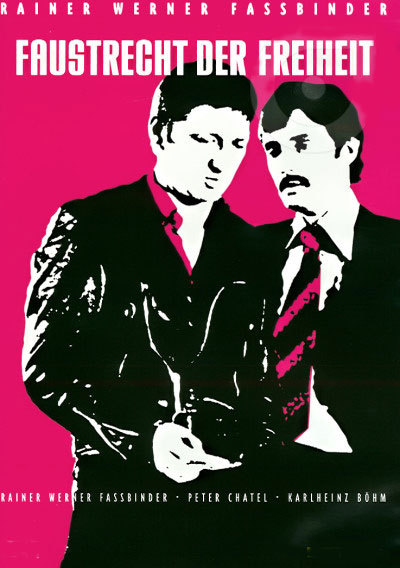 While I have respect for the problems of the film from the gay perspective (as I’ve read it) I find it difficult not to attribute something deeper in Fassbinders motivations – because he stars in the film and is, indeed gay. This for me ultimately, won me over to the film.