Posted by lisathatcher on March 4, 2012 in Book Reviews | Leave a comment 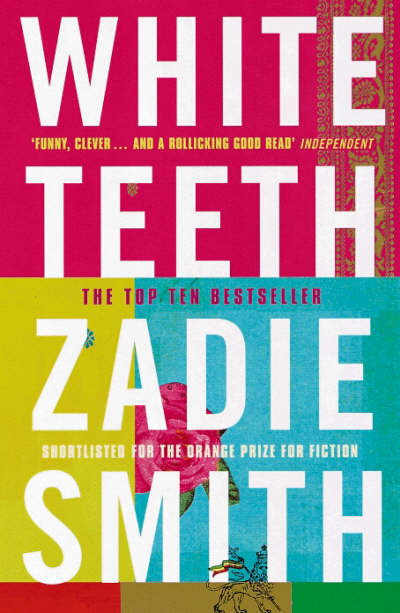 Early in the morning, late in the century, Cricklewood Broadway.  At 06.27 hours on 1 january 1975, Alfred Archibald Jones was dressed in corduroy and sat in a fume-filled Cavalier Musketeer Estate face down on the steering wheel, hoping the judgement would not be too heavy upon him. He lay forward in a prostrate cross, jaw slack, arms splayed out either side like some fallen angel; scrunched up in each fist he held his army service medals (left) and his marriage licence (right) for he had decided to take his mistakes with him.  A little green light flashed in his eye, signalling a right turn he had resolved never to make. He was resigned to it. He was prepared for it. He had flipped a coin and stood staunchly by its conclusions.  this was a decided-upon suicide.  In fact it was a New Year’s resolution.

And so begins, in my opinion, one of the best novels written this century.

I’m a little behind the eight-ball in waxing lyrical about this brilliant novel.  Many people have read it now and even more have read the reviews of it. It was one of the first in the “mega-trend” of multicultural voice novels that still powers strong. I thought, seeing as this blessed book has been so brilliantly revised, talked about and analysed (as well it ought) till the cows come home, there wasn’t much I can add.

For those who aren’t aware, this book is about the assimilation of different cultures into British Western society.The story mixes pathos and humour, all the while illustrating the dilemmas of immigrants and their offspring as they are confronted by a new, and very different, society. The reader can determine qualities and negativity about certain non-British cultures while they are contrasted in the setting of an altogether different host culture. Middle-and working-class British cultures are also satirised through the characters of the Chalfens and Archie. If that all sounds a little dry, I’d like to add that it is very funny (Zadie Smith has an intellect not to be trifled with) and filled with the observational wit we expect from classic great novels. The relationships between the characters are flawlessly played out – no one is underdeveloped and never is the reader ‘explained too.’ (pardon the pun)

Conflicts immigrants experience while assimilating are skillfully revealed, and not just to a white audience. Immigrants learn and reveal their prejudices about other cultures. it would all be very PC if it wasn’t so brilliantly written and subversive in its unashamed intention to reveal the human condition. Sometimes our life long prejudices are built on lies, sometimes traditions, sometimes inappropriate fashion. Or worse – guilt.

And this brings me to a rather harsh point.

In his 2010 article in The Gardian, Slavoj Ziezek laments the state of Westernized nations (and beyond) in the following way:

Recent electoral results in the west as well as in the east signal the gradual emergence of a different polarity. There is now one predominant centrist party that stands for global capitalism, usually with a liberal cultural agenda (for example, tolerance towards abortion, gay rights, religious and ethnic minorities). Opposing this party is an increasingly strong anti-immigrant populist party which, on its fringes, is accompanied by overtly racist neofascist groups. The best example of this is Poland where, after the disappearance of the ex-communists, the main parties are the “anti-ideological” centrist liberal party of the prime minister Donald Tusk and the conservative Christian Law and Justice party of the Kaczynski brothers. Similar tendencies are discernible in the Netherlands, Norway, Sweden and Hungary. How did we get here?

Assimilation poses a difficult problem for “Westernized” PC intellectuals. There is the issue of Culture v’s Human rights – an unnatural ‘opposition’ that ought never to see the light of day.  An excellent example of this is the tolerance for The Burqa over a fundamental intolerance for, say, the Caste system in India. We can see clearly when the problem is not on our streets, however when the problem is in our backyard, we will either roll over and play dead or (horrifically) sign up with the neo-cons (the arch-enemy) and agree to an outright ban that, although fascist, pushes the point home a-la-Nina Simone … we’re told to go slow… it’s their revolution… go slow.

So what is the left-wing intellectual to do? Particularly if they are a baby boomer? These are the people who marched in the streets for Vietnam, and changed the course of a war. The same numbers, same passion, same marches didn’t affect either gulf war, and if Occupy “everything” has any real effect outside of an impotent mobilisation, we are yet to see it.

After the disintegration of the communist regimes in 1990, we entered a new era in which the predominant form of the exercise of state power became a depoliticised expert administration and the co-ordination of interests. The only way to introduce passion into this kind of politics, the only way to actively mobilise people, is through fear: the fear of immigrants, the fear of crime, the fear of godless sexual depravity, the fear of the excessive state (with its burden of high taxation and control), the fear of ecological catastrophe, as well as the fear of harassment (political correctness is the exemplary liberal form of the politics of fear).

Such a politics always relies on the manipulation of a paranoid multitude – the frightening rallying of frightened men and women. This is why the big event of the first decade of the new millennium was when anti-immigration politics went mainstream and finally cut the umbilical cord that had connected it to far right fringe parties. From France to Germany, from Austria to Holland, in the new spirit of pride in one’s cultural and historical identity, the main parties now find it acceptable to stress that immigrants are guests who have to accommodate themselves to the cultural values that define the host society – “it is our country, love it or leave it” is the message.  Slavoj Ziezek

When I was working with hungry people in Africa I learned that the greatest enemy from the “West”, was not fascism or racism, it was guilt. The ugly, compliant guilt of a group of intellectual citizens who could make a difference if they mobilized, but didn’t – largely due to a paralyzed state. Guilt that the ralleys and marches make no difference, guilt at their own busy-ness with their own liv-es, guilt at ineffectiveness, guilt over pleasure and guilt over not donating enough at Christmas.  If Christianity has left one legacy that the celebrity evolutionists have yet to explain, it is guilt.

Is it possible that this profound white guilt is at the heart of the passion for the multicultural novel?

Of course it’s not just the multicultural novel that suffers under the weight of liberal guilt, but given the splendor of Zadie Smith’s novel and the mediocrity of so many others (I don’t want to single out anyone – we all know who they are) one can’t help ask if the successful novel in this day and age is one that complies with (sympathises with) the struggles of the left-wing elite as they work so hard at doing nothing:

Contemporary American fiction has become cheap counseling to the bereaved bourgeois.  Its scope is restricted too much to the trivial domestic sphere.  It promotes grief, paralysis, inaction:  a determinism for the post-politics society, where ideology has no place.  Mired in appreciation of beautiful (or rather prettified) language for its own sake, without connection to ideology—although that is an ideology of its own, and perhaps the most corrosive and debilitating ideology of all—serious fiction writing today has lost any connection with a wide, appreciative readership.  There are no more writer-oracles in America, nor even writer-visionaries, or writer-sages.  There is only small writing, with small concerns, and small ambitions.  Very little fiction today aims for a universal audience:  the market segmentation of specific niches of writing forces writers to address discrete audiences, those who already read their particular brand of writing, while great possibilities of disrupting the fixed manners of reading go ignored.  Anis Shivani

For me this is bound to the loss of a passion for language and for art. Art almost occurs as a guilty pleasure while gallery’s and books have become networking aids. There is a complete domestication of the thinker.  They are too busy with career and family to think deeply about the human condition. Oh, and lets not forget the many and varied seductions of internet and television that serve to ‘feed’ the need for the examination of the unexamined life – temporarily quieting the hunger for the answers to the question of what it is to be human, feeding plump a still-water guilt turning rancid in our psyche. Where feminism and the assimilation of different cultures was meant to add to the universal voice, instead these inclusions are reduced to a pin-head dance, wanting more than anything else to stroke the reader:  “There there, I understand.  It happens to me too.” And the rest of literature along with it.

Zadie Smith didn’t just speak about multiculturalism and assimilation in her brilliant book.  She also wrote about the power of friendship, and the way an entire life-long connection can be built on an error of judgement, and usually is. She wrote about the bonds that occur through hardship and of the bustle of life responding to political movements and she wrote about the dignity and respect the working class can show for each other. This, for me, sets this novel apart from the endless flood of irrelevant and often lauded others.

I will close this review (rant) with a quote from Anis Shivani from his lament about the state of literature today:

If we don’t understand bad writing, we can’t understand good writing. Bad writing is characterized by obfuscation, showboating, narcissism, lack of a moral core, and style over substance. Good writing is exactly the opposite. Bad writing draws attention to the writer himself. These writers have betrayed the legacy of modernism, not to mention postmodernism. They are uneasy with mortality. On the great issues of the day they are silent (especially when they seem to address them, like William T. Vollmann). They desire to be politically irrelevant, and they have succeeded. They are the unreadable Booth Tarkingtons, Joseph Hergesheimers, and John Herseys of our time, earnestly bringing up the rear.