Home » Music Reviews » Oren Ambarchi – Audience of One: And one is all it takes

Oren Ambarchi – Audience of One: And one is all it takes

Posted by lisathatcher on February 20, 2012 in Music Reviews | 1 Comment 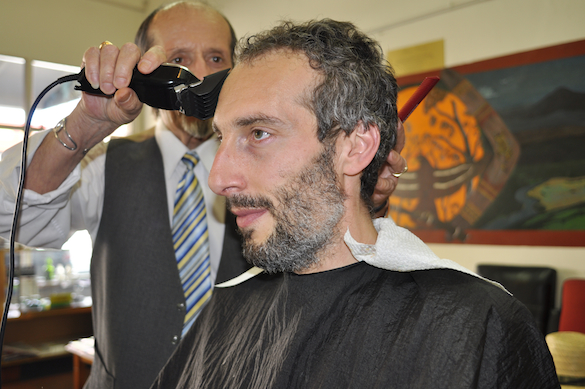 Australia is a nice place.  Pretty beaches, good economy.  Hard to get into. All the things we Westerners love.  It can get a little thin when it comes to artistic contribution, however.  We’re good at providing the world with actors (Mel and Nicole for example), and capitalist dictators (Rupert), however when it comes to the avant garde, or experimental – we CAN be a little behind the eight ball. Or rather, we tend to send these enormously talented people into obscurity in this country, hoping the world only finds out about the Minogues.

However, in the case of the brilliant Oren Ambarchi, I’m proud as punch to inform you we haven’t been able to kill his passion.

Oren Ambarchi was born in Sydney, Australia to an Iraqi Jewish family. Ambarchi has been performing live since 1986. In the late 1980s he played free jazz in Sydney, originally as a drummer.  In an interview with ABC Radio broadcaster, Jon Rose, Ambarchi described how he started playing guitar,

There happened to be one laying around in our rehearsal room. I picked it up and starting hitting it with drumsticks and using it in whatever way I wanted to use it in, and one thing led to another. I’m glad I wasn’t trained. I’ve always loved rock music, I grew up listening to pop and rock, so that was in my mind, but I’ve also been interested in electronics. I never wanted to learn to play it properly, it was an object as much as an instrument.

He was a member of noise band Phlegm with Robbie Avenaim, with whom he co-organised the What Is Music Festival. His work focuses mainly on the exploration of the guitar, though he also plays drums and percussion in some of his live performances.

On “Audience of One”, Oren Ambarchi  presents a four-part suite moving through thobbing minimalism to beautiful sing-song craft on to ecstatic free rock. In the past he’d revealed a clear progression towards embellishing his signature bass-heavy guitar tones with fragile acoustics.  Audience of One moves that on to a whole new level.

Despite our expecting always something experimental from Ambarchi’s, the first track, Salt is a surprise, as is the final track – a cover of Ace Frehley’s Fractured Mirror.

Salt starts with the ambient bell-toll-tones typical of Ambarchi but swiftly moves into Paul Duncan’s vocals that are multi-tracked to give the ballad a resonating blurred edge that sits well with the tonal quality of the piece. Duncan is twelve people, making the track a misty thing of beauty. While the vocal exists, it takes centre stage with Ambarchi’s electric meanderings taking a sweet back seat. Half way through they move to the fore, giving us the opportunity to relish the beauty behind the absolutely lovely song.

The next track – the 33 minute leviathan  replete with an arrangement for strings and horns by Eyvind Kang, builds slowly, its many voices drifting past like cast-offs in a shallow pool.  It starts as a slow and heavy drone with the occasional fade, but builds and builds in intensity.  It’s a dark little number, this. It finally climaxes, bursting into distortions and scattered percussions before rolling and falling its way down the other side. One of Ambarchi’s signature tricks is his ability to rise slowly to his crescendos and pull back into his silences and KNots sees him perform this in fresh and interesting ways.

I’m not so familiar with Ambarchi’s earlier works, so I didn’t know this was a new take on an older theme he often runs, but I will say for me it is the pick of the disc – even if I have to rush Knots as a close second. I know everyone loves Salt, and (next) he covers Kiss, but for me this piece held the quivering beauty  better than anything else on the album. I’m keen on discords and electronic influences, however… so bear that in mind. I like the voice here a lot – it blends into an anonymity with the instruments that I find very appealing.

So how is this for a twist?  It’s Ace Frehley’s Fractured Mirror! What a surprise.  That was a real WTF for me.  This track is lighter and longer, but for the most part he retains the nostalgia of the Kiss lead singer with a sing-song ring to modernise it up a little. This track isn’t too out-of-place, considering there is so much departure from the norm on this disc anyway. However, I have to confess to being a tad surprised at the choice. Ambarchi does a stellar job however, that even the most hardened Kiss-fan heart would be pleased.

This is an album with a lot of confidence and a remarkable breadth that the label (Torch) claims has come close to encapsulating Ambarchi’s musical personality with its full range and singularity. To quote the label:

The techniques and strategies developed in his refined improvisational work with Keith Rowe and his explorations of the outer limits of rock with Sunn O))) and Keiji Haino are both in evidence, alongside the meticulous attention to detail and composition of his solo works.

The album features a multitude of collaborators, who, far from appearing in incidental roles, are integral to the pieces on which they perform: on ‘Salt’, Ambarchi paints a hypnotic, chiming backdrop for Paul Duncan’s (Warm Ghost) vocals, and Joe Talia’s virtuoso drumming and driving cymbals are at the core of the epic ‘Knots’, in which Ambarchi, alongside a chamber arrangement by Eyvind Kang, weaves a net of frequencies and textures with the organic push and pull of a 70s psych jam, the bass response of a doom metal ritual and the psycho-acoustic precision of an Alvin Lucier composition.

On his previous records, Ambarchi’s signature guitar tone was the ever-present bedrock over which other elements sounded. At moments on Audience of One, this disappears entirely, as on the beautiful ‘Passage’, which, recalling the 70’s Italian non-academic minimalism of Roberto Cacciapaglia and Giusto Pio, is composed of overlapping tones from Hammond organ and wine glasses, Jessika Kenney’s voice, various acoustic instruments, and the delicate amplified textures of Canadian sound-artist Crys Cole. Rather than being provided by any particular sound, the unified feel of Audience to One stems simply from the unique, patient sensibility Ambarchi has developed over the last twenty years; abstracting musical forms into their barest forms, while somehow always managing to leave their emotive power intact. [Francis Plagne]