Tokyo Kid Brothers – Throw Away The Books, Let’s Go Into The Streets (1971)

Posted by lisathatcher on January 17, 2012 in Music Reviews | 5 Comments

I’ve had the pleasure of listening to some outstanding music in the past seven days, some of it contempo, some of it retro. Among the gems on my ipod at the moment, are Tokyo Kid Brothers – Throw Away the Books, Let’s Go Into the Streets.

Glorious, psychedelic japanese freakout music from 1971 that is sure to blow your mind, this is a brilliant fun album, that I know has been talked about to death on the good old blogg-o-sphere but I can’t help it if I’m a little behind everyone else when it comes to brilliant music. Better late than never.

Anyway, the Tokyo Kid Brothers were a Music Theater Commune who, despite operating for thirty years or so, left almost no trace of their existence. Even when they started making soundtracks, the only existing copy of their music appeared in the movie itself, which is why you’ll hear dialogue, sound effects, and incidental noise in addition to the actual music. Although this soundtrack is even more compelling when accompanying the movie (Tokyo Pilgrimage Poem, for instance, is doubly wrenching when it plays over the protagonist losing his virginity to a prostitute hired by his father), just listening will give you an idea of the wild, genre hopping, Boredoms-like intensity of this group. Bearing in mind the soundtrack’s release was a few years delayed, Tokyo Kid Brothers were making this stuff when everyone thought the White Album was so freaking crazy. Influential, revered, unmissable.

I’ve got bits and pieces of the album here for your listening pleasure. Download link included here. 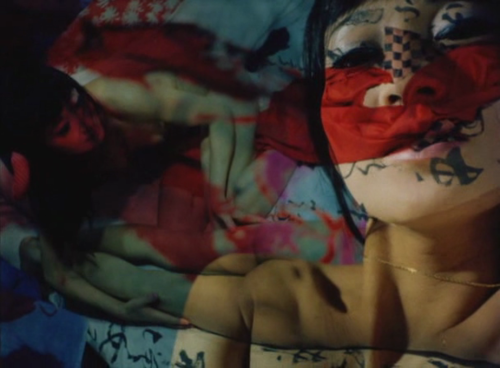 Track One: Starts with trash song and trash singing that drags you in with the enthusiasm. traditional styles of psych mix with the vocals to scream the thrill as you drink in your introduction to this great album. This moves into a bizzarre female voice over – my Japanese is non-existent so I can’t help with any kind of interpretation here, then the track moves into this pounding drum explosion followed by tight choral work in a sound off echo sitation with a main voice. This is a great introduction to the rest of the album.

Track Two: is nothing more than a subdued piano solo to help you get your breath back after the outlandish exhuberance of track one. But it doews help you understand there will be so much more than you expect to this outfit.

Track Three: Somber drums and a slowed down psych feel drag you into track three (one of my favourites on the album) and then starts to propell you forward as the track builds and builds to a find credshendo. Vocals are poured throug the song without the clumsey weight of words – the groaning sounds almost a capella style. I adore this track and confess to giving it a coupe of goes over (something i try not to do – but every now and then I am weak)

Track Four: We’re back to a fairly simple piano and slight backing arrangement that underly a stunning vocal again on track four. Again, I can’t interpret here, but the musical style is one of those error laced vocal stlye that really works soemtimes. Choral work again comes in with strength and this turns out (without interpretation) to be a pleasant track on the album.

Track Five: Great Stuff!  Nothing screams raw power at you like Japanese in full flight. This is great this track, the full weight of a potant culture pressing itself into pure seventies psych. The guitar work here deserves a mention – its amazing. This is another standout on the ablbum and a track to remind you, you do not know what to expect here.

Track Six: Back to pure psych- this sounds more like a song out of HAIR than teh rest of the album.  Again, its the enthusiastic choral work that gives the track its power.  What wouldn’t we give to have been a part of this commune?

Track Seven: Somber cymbal beats start this track off, though its soon joined by that great choral work we’re getting used to from this album. Again its the build that gets you, but then there is that male voice that comes in with the tears. I haven’t seen the film, neighther can I understand the language, but I get the language of tears and the sufering here is edgy. The chant of the other male voice beneath it underlies whatever trgedy is going on.

Track Eight: We’re back in pure synth psych land again here, propelling us toward the end of the album. Everything we;ve come to love from this album is in this track. The energy is back for this track, the force and power of the album that is so compelling. That choral work is hypnotic. the keyboard work here will blow your mind.

Track Nine: Back with something more slow and meaning ful here for track nine.

Track Ten: A wonderful, catchy pop-ish song here with nice synth over the top of it, and a catchy chorus.

Track Eleven: Another beautiful slow song (this time with female vocals) rounds out the second last track. All the way though this album we are kept in tough with that magnificent Japanese kitch we love, and its in abundance with this track. The sleazy vocals sliding all over, teh male voice moving in, the slipperyness of this track underlied by its pure force makes it another stand out on the album.

Track Twelve: The final track on the album is pure voice over with a slow music underscore behind it. You and I both suffer from my inability to interpret here. Apologies.

← The Girl with the Dragon Tattoo: David Fincher goes Hollywood on Sweden Larks on a String: Jiří Menzel and Bohumil Hrabal defeat totalitarianism with spirit. →