Beware of a holy whore: Fassbinders take on film

Posted by lisathatcher on January 11, 2012 in Film Reviews | 2 Comments

I really really enjoyed this film!

in researching Fassbinder, I have read that he was heavily influenced by Jean-Luc Godard and I can only assume that to be the case, because Godard is all over this fantastic film – however Fassbinder has the smarts and the eye to take Godard just that little further. In other words, more than any other director I have seen, Fassbinder builds on Godard.

Apparently this is Fassbinders favorite film that he made. It’s the second of his films that I have seen, and marks a break between the abstract early films and the unique melodramas that followed.  And it is a probing, multi-layered view of human experience – of frustration, brutality, and especially love – seen through the unlikely but fascinating metaphor of a stranded movie crew.

Beware of a Holy Whore is a knowing satire – part screwball comedy, part existential pseudo-documentary – about the experiences of a primarily German film crew and cast stuck in a seaside hotel in Spain, waiting for money to come through to finish shooting. But that is only one of their problems. The star, Eddie Constantine (playing himself), thinks his part is too brutal – especially since he is having an affair with the lead actress, Hanna (Hanna Schygulla); the director hasn’t shown up yet; and it seems that everyone is sleeping – or at least trying to sleep – with everyone else, regardless of gender. When the tyrannical director shows up (in a Helicopter much like Hitlers arrival in Triumph of the Will) he makes life even worse for his cast and crew. PLayed by Lou Castel (and apparently the character is completely autobiographical – this is how Fassbinder saw himself and his relationship with his cast – and in a nice play of metafiction he casts a male who is his physical opposite) Jeff makes life impossible for his producer Manfred (Karl Scheydt) who is also in love with him, his production manager Sascha (played by Fassbinder himself) his sudden fling Babs (Maragrethe von Trotta) who is also Sascha’s girlfriend, his ex named Irm (Magdalena Montezuma) who has convinced herself that she would “bear his children,” and especially his off-again, on-again boyfriend Ricky (Marquard Bohm).  Jeff will harass anyone and everyone on the set, screaming for extras to be found a moments notice one minute and having them all dismissed (in a strikingly beautiful shot) when he doesn’t feel the shot is going well.

Yet we also see Jeff’s passion for filmmaking, such as the spellbinding scene in which he tells the cinematographer Mike (Gianni Di Luigi) exactly what he wants in a complicated shot and why. As the pressure – and unpaid bills – mounts, the cast and crew’s petty bickering escalate into shouting matches, and everyone tries to devise ingenious, albeit desperate, ploys to make it through this crazy production… which may or may not ever wrap.

Despite the fact that this is only the second Fassbinder film I have seen, it is said to be a pivotal demarcation point between earlier works and later ones, and having seen one of the later films, i can see a transition happening here. The final quarter of Beware of a Holy Whore shows Fassbinder’s increasing mastery of narrative form, in his ingenious and evocative use of ellision, with scenes sometimes radically compressed or even dropped; although those “missing” scenes are as clear as the ones we see, since Fassbinder has drawn us so completely into his world that we fill in the gaps with our own imaginations.  I found this aspect of the film fascinating and drawing heavily on the concepts of metafiction. I haven’t felt a director come this close to the written word since watching Godard. It was intensely clever to watch it all unfold. It’s rare a film gets more and more exciting as it progresses. This film did that for me.

Music is used brilliantly here as well. Fassbinder happens to use one of my favourite albums as a backdrop for the human misery displayed in comic form on the screen. YOu just can’t get too happy dancing to Leonard Cohen’s Songs of Leonard Cohen. Other music includes  his regular collaborator, the great Peer Raben, to a wide range of popular songs –  Ray Charles (“Let’s Go Get Stoned”), Elvis Presley (“Santa Lucia”) and Spooky Tooth (“I’ve Got Enough Heartaches,” “Hangman Hang My Shell on a Tree”), to a haunting Donizetti aria. 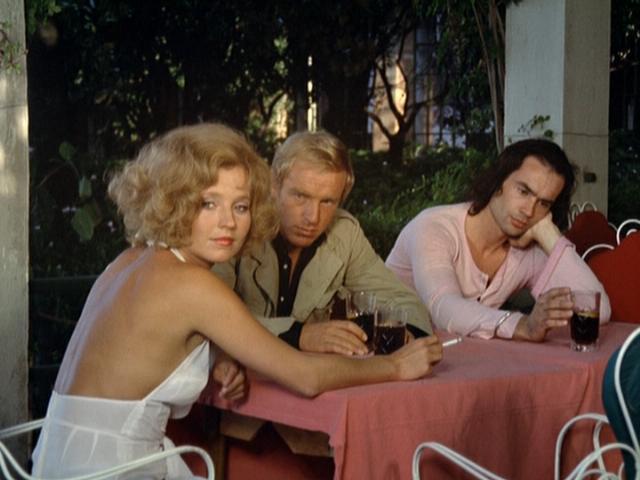 Fassbinder’s use of music connects with his precise use of rhythm, both within scenes and in the overall flow of the film. He edited virtually all of his films  which gave him exceptional control of pacing. One of his favorite techniques – as we can see throughout this film – was to slow a scene, especially one with passionate but unspoken emotion, to a painfully slow crawl, forcing us to pull away from the non-action even as we engage on a deeper level with the characters.

Something also must be said for the extraordinary art direction and camera work of this film. The art direction was by Kurt Raab and the cinematography by Michael Ballhaus (for the past twenty years he has shot almost all of Scorsese’s pictures), whom Fassbinder once called two of his “essential collaborators” . The film sports a warm palette of yellow, pink, and pale blue, and the hotel, although a bit rundown, is in a gorgeous seaside location. But those inviting elements are in striking contrast to the intensely claustrophobic feel achieved by Fassbinder and Ballhaus through carefully-framed compositions, a few well-chosen zooms (which are simultaneously involving and distancing), and sporadic camera movement. To further emphasize that quality, Fassbinder makes extensive use of the lobby, which comes to feel almost like a prison yard with its bar-like columns. During one of the most breathtaking shots in the film, the camera does a 360 degree pan around that sprawling, yet empty and confining, lobby – like an image out of Edward Hopper – exposing the passed-out or zonked-out cast and crew aimlessly killing time. The shot is both liberating, in its gracefully circular movement, and constricting, as it hermetically seals the characters in a space reminiscent of the one in Sartre’s hellish play,No Exit.

Scene after scene in this beautiful film, where the characters (actors waiting to be ‘directed’ or workers on the film waiting to be directed) are often placed as if pieces on a chess board. They will be moved around throughout the film, shown as pawns in a game, archetypes and symbols of some other thing. People in this film are objects. They are objects to us, to the director and to each other. Everyone ‘tantrums’ out their emotions, and no one (except the long-suffering Spanish Waiter) delivers any authenticity. Scene after scene Fassbinder ‘arranges’ everyone so we get a sense of the superficiality and the inauthenticity of existence. The feel is claustrophobic. One particular scene shows everyone laid over the top of each other on a balcony over the ocean. the water ripples beneath them, and the bodies writhe against each other, as the director looks over at them from above. We sit above the director, looking down in judgement upon them all. The scene is breathtaking. I watching it over and over again.

Beware of a holy whore is also very funny. The amount of Cuba Libras consumed followed by smashing glasses is very witty and made me laugh loudly. Everyone’s tantrums and tears are done with mystery and mirth so that they are deeply funny. However, true to what I now know of Fassbinder, there are still scenes of confront, dressed up on humour to make us uncomfortable. A very funny scene is when Jeff crosses the floor and slaps Irm across the face. Its darkly funny – and yet this man has just hit a woman. Fassbinder has been accused of misogyny, and at risk of sounding sycophantic, I’d argue this is not misogyny on display here, but a push to discomfort. 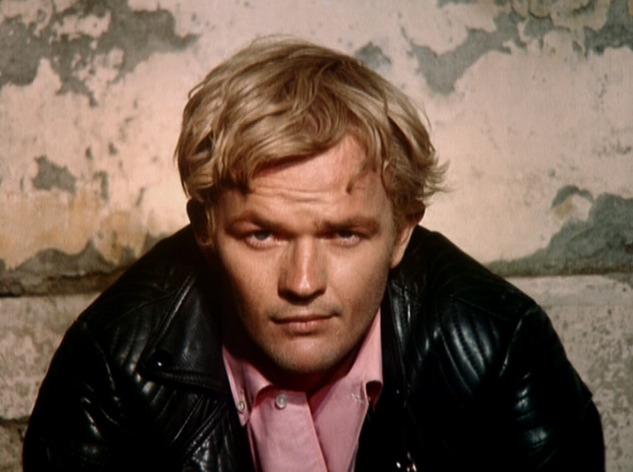 The great film blog Jim’s reviews had this to say about Fassbinders use of violence in tis film:

Although for some viewers this film is primarily a comedy, it is, more precisely, a multi-layered comedy about violence. When one of the on-set photographers asks Jeff what type of movie he is shooting, he replies, “It’s a film about brutality. What else would one make a film about?” Of course, its title is a dead giveaway: Patria O Muerte, literally, “Motherland or Death” (that arch reference to nationalism would have special meaning for Fassbinder, who was fully aware of his country’s recent past). And it comes as no surprise when Jeff tells Deiters and Korbinian, “If I can’t smash something, I might as well be dead.” As in so many of his films, Fassbinder locates the sources of violence in a tangled web of areas, from the socioeconomic to the personal. In a cuddly scene between the two leads in the film within the film, both playing “themselves,” Hanna Schygulla insightfully tells Eddie Constantine, regarding Jeff, that “Society has made him dead somehow. He can’t react from within anymore.” (In a playful touch, Fassbinder has him respond, “Don’t talk so much,” as he continues putting the moves on her.) Jeff shows his own political slant when he explains his take on Constantine’s signature character, detective Lemmy Caution. (Constantine played the role in eleven movies, from 1953 till 1991; the most famous of which is also the most atypical: Godard’s revisionst 1965 science fiction (!) film, Alphaville, a Strange Adventure of Lemmy Caution.) As Jeff says, “Lemmy Caution was always such a gentleman, so noble. What I want to show here is the guy at the height of power. Brutal, cold-blooded, capitalistic, rational, cold as ice. I don’t want to show a grain of sympathy for people who act in the name of some fascist government.”

As with many of Fassbinders films, homosexuality and bisexuality take front and cenre stage here.  there is a bizarre opening monologue which would make Disney cringe with its talk of Goofey in a dress. It is delivered in classic deadpan by the mysterious photographer Deiters (played by Fassbinder’s openly-gay friend, avant-garde filmmaker Werner Schroeter).  Most of the men in the film are gay or bi. Then there is the superficially understated but profoundly intense relationship of Jeff and Ricky. Fassbinder employs a natural, matter-of-fact tone in the two men’s scenes together, whether they are discussing logistics on set or lie naked together in bed. In the most dramatically abstract moments in the film – Ricky when alone in his car, and Jeff in the final seconds of the film – both utter exactly the same chilling line but in reference to the other man: “I guess I won’t be content until I know he’s been completely destroyed.” This uncanny, yet thematically incisive, parallel indicates the extent to which human relationships can become so entangled that they corrode the person. And yet, Fassbinder does begin the line, for each of them, with the qualifier, “I guess…” – that may be all the hope we have for the possibility not-unhappy ending.

I could go on and on about this film, but I think I have said enough. If you haven’t seen it – make it a top priority. I absolutely loved it.

If you enjoyed this post, please consider subscribing to my blog. There is a new film review each day. I review contemporary art house, foreign films and historical genius.

← The Weeknd: Thursday Samla Mammas Manna’s Maltid: Prog Rock the way it was meant to be. →