The Trial of Joan of Arc: Bresson answers Dreyer with sound

Posted by lisathatcher on January 10, 2012 in Film Reviews | 1 Comment 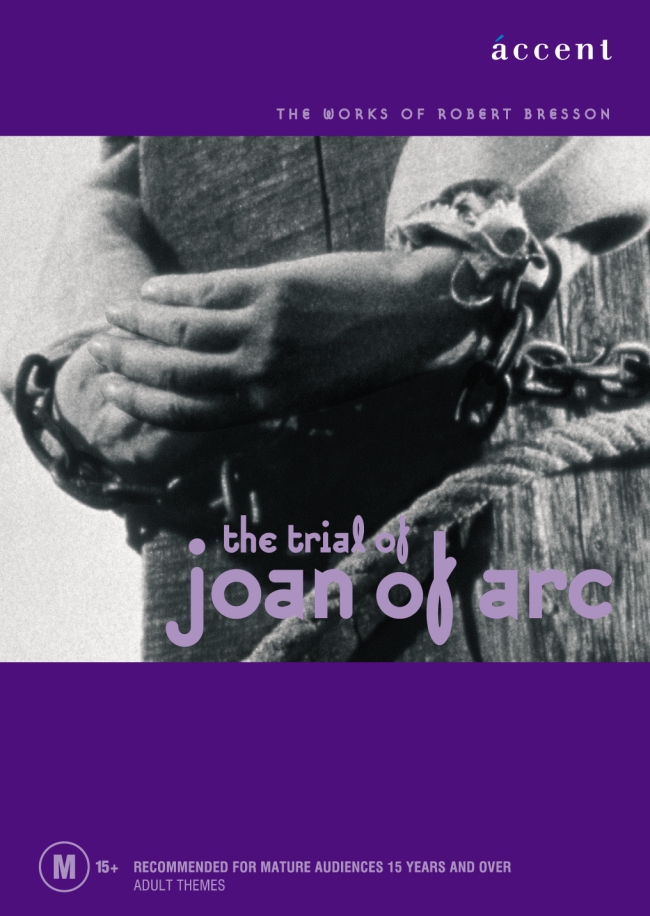 The Trial of Joan of Arc by Robert Bresson tells the story of Joan of Arc during the final period of her captivity and her execution in 1430.  As with all Breasson films, there is no back story to the lives of the characters, but in this case, one is not necessary. This story is very well-known.

Joan, an illiterate 17-year-old peasant girl, approached the besieged French military forces during the Hundred Years War and swore that voices from God and His messengers had commanded her to help the French army drive the English from French soil. She was given command and proceeded to lead her forces to a string of stunning victories over the English that reversed the course of the war. However, she was captured in action by the French Burgundian allies of the English in 1430 near Compiègne and eventually turned over to the English military authorities in Rouen. There she was placed on trial for heresy before a Roman Catholic Church court made up mostly of clerics sympathetic to the English cause. It is this trial that comprises the story of Bresson’s film. 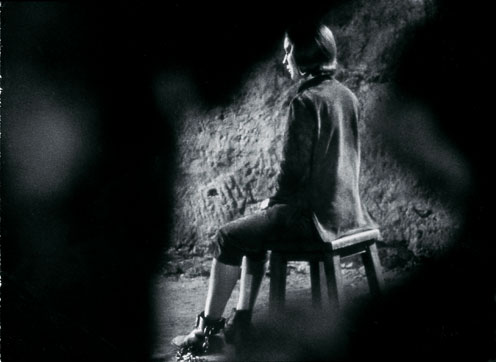 This films screen play is taken from the court records of the trial and from the depositions from eyewitnesses to her subsequent execution taken at her retrial twenty-five years later. These records of fascinated scholars for hundreds of years, mostly because of how remarkably complete they are.  Dreyers famous The Passion of Joan of Arc also relied on these records, and I will do a review of his work this week as well, because I think it is worth comparing the two films since the source data is identical.

For Dreyer, who made s silent film, the notes are displayed on the faces of his actors. for Bresson, who had sountrack at his disposal, the completely opposite approach is used. The advantage of being able to rely completely on the words means Bresson is able to conduct a study on what this woman was like. Joan’s answers are precise and give a strong indication of the inner machinations of her mind. Bresson uses the words to take us deeper into the Joan of Arc story.

Bresson’s stylistic choices in this film must be seen in the light of his characteristic aesthetic style, which had developed over the course of his preceding films: Les Dames du Bois de Boulogne (1944), Diary of a Country Priest” (1950), A Man Escaped” (1956), and Pickpocket (1959). By now Bresson’s pattern was set. He would always use unprofessional actors (his “models”) with no previous acting experience, who would be instructed to render “flat” performances and show almost no emotion when they read their lines, often with downcast glances. Typically he also avoided scene establishing shots, preferring to focus on medium and close shots, often even focussing on hands and feet. This approach contributes here to the feelings of confinement and claustrophobia (and even paranoia) that effectively evoke the stressful circumstances of imprisonment.

Here as elsewhere in Bressons films, he keeps Joan at a distance from us, so that we feel for her but we don’t identify with her. This is typical of a Bresson message. He prefers the subconscious feeling of disturbed wonder to the intimacy of getting to know his characters. But there is another difference here that is particular especially from a film like Picpocket. In Pickpocket we are confronted always with pauses in the action and narrative. Doorways, halls, pauses – thee are all to pull us out of the action and into reflection. Such pauses are not present in The Trial of Joan of Arc. Instead, we have just the opposite – a rapid-fire exchange of verbal statements that come so quickly and unnaturally that they seem not to correspond to any kind of reflective response to the preceding statements. This means the film is very short (it’s only 62 mins long) and that may appear to be a good thing given how tiresome court scenes can be (and this is a film with nothing but them).

The overall effect created by Bresson is nevertheless impressive. The rapid-fire exchanges undertaken by expressionless, seemingly body-snatched, clergy make the entire proceedings even more relentlessly inhuman. The clergy are soulless automata that are faceless representatives of the Church machine. While Dreyer saw the individual clergy as the enemies of Joan, in Bresson’s film it is the faceless authority of the church. The clergy here are cogs in a machine, that is a familiar villain in Bresson films.  Bresson’s aesthetic style, which evokes a feeling that everyone in the film is sleepwalker, enhances the sense of horror that this indictment arouses. Joan had to be condemned as a heretic, in order for the Churchmen to retain their structured command over the laity and the people at large. This is perhaps also why the Church was so tardy (1920) in canonizing Joan. In fact it’s remarkable that this dramatically independent individual, inspired by her own profound spiritual experiences, was ever endorsed by the clerical establishment.

Bresson’s “Joan”, played by Florence Delay, is very self-contained and less vulnerable than Dreyer’s Joan. Despite the hostile circumstances of her captivity (continuously enchained and spied upon), she is generally composed and sure of both herself and her answers.  Delay’s Joan is not in awe of the authority of the court and clergy, and she often stands up for herself, or openly corrects her attackers. It is well-known, of course, that Bresson doesn’t use professional actors, because he wants to avoid having someone “perform” a role – presumably because he wants his players to embody the character in an intuitive way. But it is interesting that his selected “models” are usually intellectuals, writers, and professionals. Florence Delay was the daughter of a member of the Académie Française, and she, herself, was elected to that body years later. So it seems that his models might have the inclination (and even be encouraged) to engage the character in an intellectual, rather than intuitive, manner. Intellectually-inspired or not, Delay’s “Joan” is nonetheless effective and convincing. 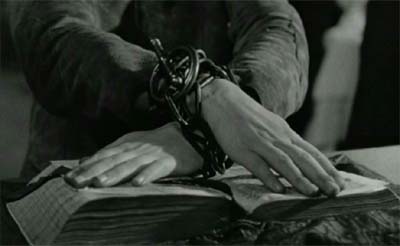 Dreyer subverted theater rules by magnifying them, giving more power to individual images and sensations than would be possible on stage. 37 year later Bresson responds by paring them down, restricting feelings and sensations, fashioning his tale of sacrifice into an abstemious hymn.

For more on the films of Robert Bresson, read this great article by Susan Sontag here.