Posted by lisathatcher on January 7, 2012 in Film Reviews | Leave a comment

After completing Gran Casino, Luis Buñuel began work on a screenplay with the Spanish poet Juan Larrea called Ilegible Hijo de Fluta (The Illegible Son of the Flute). Óscar Dancigers had a lot of trouble financing the project for them, so Buñuel agreed to direct a ‘popular’ film (aptly named The Great Madcap). Soiled by making such an “impossibly banal” film, Buñuel convinced Óscar the next film had to be a ‘real’ one (his emphasis – his words). “Oscar was ready for a ‘real’ film, and proposed that we make one about the slum children, abandoned and living from hand to mouth in Mexico,” says Buñuel in The Last Sigh.

Los Olvidados (The Young and the Damned), an “attack on the sadness that ruins children before they have a chance,” was penned by Buñuel, Madcap writer Luis Alcoriza, and an uncredited Larrea. Not surprisingly Los Olvidados was attacked in the Mexican press and by labour unions who claimed the film dishonourd their Mexico. By drawing attention to the forgotten children of the slums of Mexico Luis Buñuel highlighted a corruption beneath the facade of everyday life In Mexico. Los Olvidados would go on to win Buñuel the Best Director prize at the Cannes Film Festival and restore his notoriety as one of cinema’s most respected provocateurs. 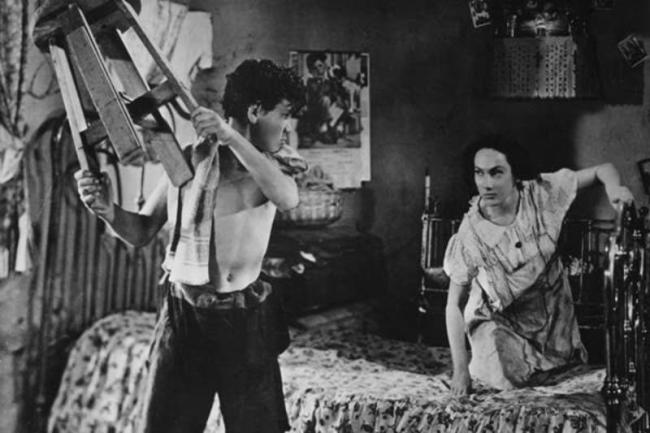 This is a film about children born into such poverty that parents turn against them. In fact almost all the adults in this film are bad with one notable exception, the headmaster of the farm school which is a kind of PC reform school for boyos. However, even the love, attention and courage of the headmaster can’t account for the evil that the children must face on the street. Their will and good intention often serve no purpose but to make them miserable as they succumb to the inevitable surrounding them. Less controversial for the brutality of its images than for the objectivity of Buñuel’s point of view, Los Olvidados purposefully lacks optimism; indeed, the director saw danger in giving solutions to problems best left to “the hands of the progressive forces of our times.” He uses a refusal to be optimistic (gusied as a ruthless objectivity) in a similar style to his making of Las Hurdes.

This is the story of Pedro, a young man trying to escape the life of the street. HIs mother has turned against him after he has dashed her hopes of his assistance with running the household and caring for the rest of the children. Indeed, Pedros mother is barely still a child herself. she has four children, the first she had at fourteen to an unknown father. This child is Pedro. Like all men without fathers, Pedro is surrounded by father figures. There is Jaibo, a ruthless delinquent fresh out of jail who heads up the street gang Pedro is a part of. But there is also Julian, a good boy who is trying to work to take money to his suffering family, dragging his drunk father home from the bar each night. When Jaibo kills Julian for an unproven (and unlikely) offence, Pedro is woken up to the reality of the world he lives in. He then tries to make peace with his mother and get a job. But the ruthless Jaibo needs to control Pedro, for he is the only witness to the murder and so Pedro, despite his best efforts, begins a ride down a slippery slope to a dark tragic place.

Blindness is important in this film. The unlikely voice of reason on the streets is Carmelo, a blind man very used to having to take care of himself. He is street wise and sometimes good and sometimes bad. “Is there no mercy for a poor blind man?” says a manipulative Carmelo, looking for a guide to lead him across a busy street. Carmelo posits a moral hierarchy to suffering when he befriends a young boy, Big Eyes, whose father has abandoned him in the town centre. Carmelo scoffs at the boy’s pain: “He’s not coming back. These things happen every day.” At the very least, the boy has his vision. Yet with the pervasive ugliness and desperation that permeates Los Olvidados, Buñuel may as well be contemplating blindness as a luxury: Perhaps it is better not to see what these children are going through.  the film is obsessed with blindness. Each time a crime is committed, witnesses prefer not to see. Pedro’s mother refuses to look past her own responses to see what her son is going through. Everyone charmed by Jaibo refuses to see who he really is. Most important of all, society is creating these lost ones and refuses along the way, to ‘see’ them.

Milk is important in this film as well, and this comes back to mothers milk and the importance of the nurturing parent. Jaibo tells Pedro’s mother of a memory he has of a woman looking down on him as a child with deep sympathy in her eyes. He knew it must be his mother (eve at that tender age) because “no one ever looked at me that way again.”  Carmelo drinks goat milk because it cleanses the body; Meche, a local girl, washes her legs with milk because it will preserve their beauty; and Big Eyes throws himself to the grown in a fit of hunger, sucking milk from the teat of a cow.

The film’s oppressive themes all come together in the film’s legendary and disturbing dream sequence. Pedro’s spirit rises from his body and is tortured by the ghost of the dead Julien and his scantily clad mother—all the while, an inexplicable wind claws at her lily-white nightgown. She floats around the room, smothering her son with love and a raw piece of meat that dangles from her hands. There’s no escape from the brutality of their world—not even in dreams.

Sex is important in this film as well, in that it is never used for love, always as a commodity, a thing to be traded for other things. Jaibo seduces Pedros mother (the ultimate act of betrayal) as both conspire to take out their anger at the world on Pedro. Jaibo, the film’s leg fetishist, grabs Meche’s leg when his hand reaches out from inside a pile of hay and later seduces Pedro’s mother by staring at her legs. In one of the most incredible scenes I’ve ever seen, a man approaches Pedro, propositioning him for sex before an approaching police officer interrupts their negotiation. All the while, Buñuel’s camera bears silent witness from inside a store’s display window, whose expensive trinkets are suggestive of Pedro’s nothingness.  It is as if Pedro is for sale. As if he is also in the store front window. 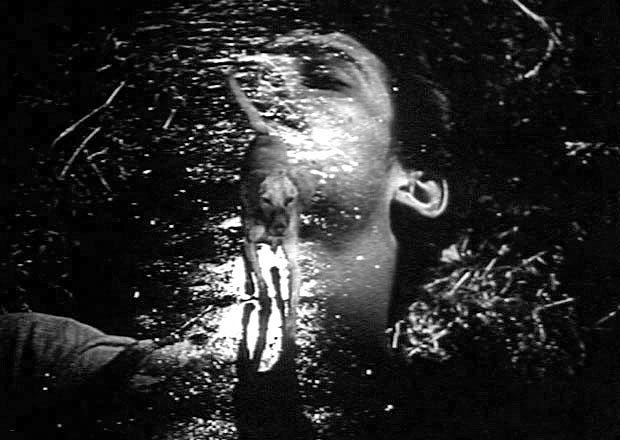 In the final shocking scenes where both Pedro and Jaibo meet their horrific ends, we are left shattered with the sadness of so much waste and neglect. Pedro is carted off by those who fear being caught with a body regardless of their innocence on the back of a mule, sacks over his body to hide his presence. His mother walks by searching for him, finally able to love her child,  the final moment of their connection and of course she doesn’t see him. Jaibo is gunned down by police for an earlier crime, as he lays dying he says  “No, no…I’m falling into the black hole. I’m alone…alone…as always…my child…as always…go to sleep and stop thinking…my child…sleep,” and we see the mangy dog coming for him. Both the boys will soon be forgotten. They will be lost to the earth ad it will be and if the world never knew them.

This wonderful film has been a very important influence on cinema. Every film ever made where a clear stark gaze is placed on children too young to make sense of what they have to handle (I am thinking of films like Kids) owes its birth to this film. As I said above, not only is it important and beautifully directed, it is suspenseful and exciting. I was on the edge of my seat, filled with hurt for these poor young children.

← Lili Marleen: Fassbinder’s take on Nazism. Woman of the Dunes: Existentialism at its disturbing best. →