1Q84: Murakami and the great disappointment.

Posted by lisathatcher on December 26, 2011 in Book Reviews | 9 Comments

I’ve just completed reading most of the Amazon reviews for 1Q84, and the recurring advice those who have completed the novel give to those about to take it on, is – Don’t think too hard.

That is excellent advice.

To be fair, they all say don’t start reading Haruki Murakami with this novel either – and I did make this my first Haruki Murakami.  So… maybe its all my fault?

I completed book one and book two over a week ago now. I didn’t rush to grab book three – thinking I’d wait to see if the desire to know what happens to these characters kicks in. It hasn’t. Like the Girl with the Dragon tatoo (and there are WAY too many similarities between these two trilogies for comfort) I just got bored with the story line and characters and won’t be completing the novel series. There is certainly nothing in the books craft that will draw me to read more either. 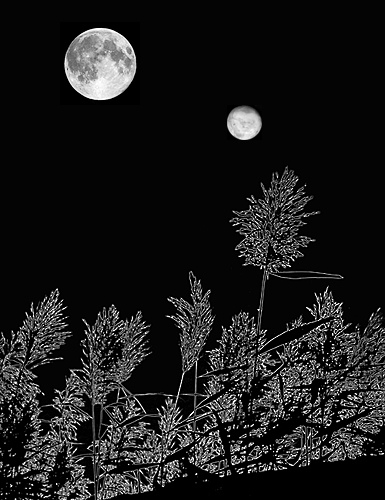 What can I tell you about 1Q84?  Is it a great story?  Not really – you have to wade through a lot of dull and pointless details about how characters construct their meals, pack their bags and inspect their own wardrobes that contributes nothing to characterisation. Is it a play on Orwell’s 1984?  One of the authors conceits is that he “tells” us (definitely does NOT show us) that it is a kind of response to 1984, he sets up the antagonists as “the little people” as opposed to “big Brother” and gives weird directional information about how to ‘understand’ his complex contrast:

“If Big Brother were to appear before us now, we’d point to him and say, ‘Watch out! He’s Big Brother!’ There’s n longer any place for a Big Brother in this real world of ours. Instead these so called ‘Little People’ have come on the scene. Interesting verbal contrast, don’t you think?”

Is it surrealism?  Well, there are two moons, and an endless preoccupation with breasts.

Is it Magic Realism? It  employs essential elements of magical realism sch as fantastical elements (two moons in the sky, little people emerging from portals that exist in mouths, Air Chrysalis) Metafiction (although the relationship between author, reader and reality is poorly thought out and clumsily delivered) Sense of Mystery (when will this painful experience end?) and Hybridity (1984 and 1q84 are different worlds that exist simultaneously).

An enormous problem with this novel, and what really got to me, was the repetition of character traits and the introduction of character traits at the point of ‘need’ for them. This gives the impression of a writer with no grasp on his subject matter. Mr Murakami comes across as a man who writes the full story in one sitting and then goes back over it to edit, however in this case it reads as though he never went back to edit:

Fuka-Eri turned in her seat until she was looking directly at Tengo. “Afraid” she asked.

“What am I afraid of?” Tengo rephrased her question.

Tengo’s armpits started sweating. He felt a suffocating tightness in the chest. Meeting new people and having new things thrust upon him. And having his present existence threatened by them.

Tengo recalled his boyhood Sunday’s. After they had walked all day, his father would take him to the restaurant across from the station and order anything he liked. It was a kind of reward for him, and virtually the only time the frugal pair would eat out. His Father would even order a beer (although he almost never drank).  Despite the offer, Tengo never felt the slightest bit hungry on these occasions. Ordinarily, he was hungry all the time, but he never ate anything he enjoyed on a Sunday. To eat every mouthful of what he had ordered – which he was absolutely required to do – was nothing but torture for him. Sometimes he even came close to vomiting. This was what Sunday meant for Tengo as a boy.

Tengo seems to be miraculously cured of this problem at this point. At least he never has a problem eating, going out, or even remembering his Sunday troubles ever again. A scenario like this, painted as significant, gets reduced to fluff in the hands of Murakami. It become trivial, because it is never followed through. Tengo has some problems with his father – sure. And they are re visited. But in this passage we are led to believe Tengo experiences traumatic flashbacks that leave his sweating and agorophobic.  One is quickly trained by the author to work out these glamorous details are there merely to help us get through the end of the chapter. They are not part of character development, and in fact we would be better served to forget them, as they will remain unaddressed.

This gives me the distinct impression I have a better grip on these characters than the author does, and that irritates me. One of the biggest mistakes a writer can make is the assumption he is smarter than his reader (reading is a partnership with writing that brings the novel alive in a holy way that only the reader will ever fully appreciate) and I am told between the lines on every page of this novel that Mr Murakami thinks he is much smarter than me. Almost to the point that he is suffering me a little. 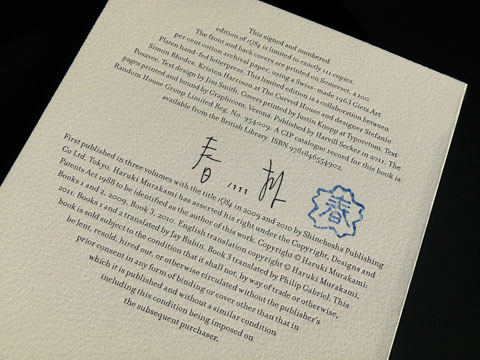 1Q84 shifts between two characters, Tengo and Aomame who have a mysterious intimate connection. One of the few things that keeps you reading is the desire (at first) to understand this bond and the hope that the star-crossed lovers will be together again. Tengo (a writer) is first seen being roped into a literary scheme. He knows an editor, Komatsu, who knows a 17-year-old girl who has written a remarkable story called “Air Chrysalis.”

Janet Maslin in the New York Times adds this:

“But the story could be made even better if Tengo would agree to ghostwrite it. Then Komatsu will enter it in a literary contest, and the girl will surely win a prize and create a media frenzy. As Komatsu keeps pointing out with unseemly eagerness, “Air Chrysalis” will be very big — Murakami-type big — on the best-seller lists.” 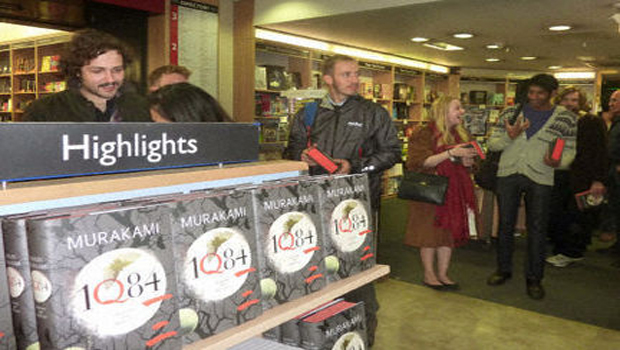 Tengo meets Fuka-Eri a mysterious young girl with lovely breasts who wrote the original Air Chrysalis. They form a bond which (oddly and VERY Murakami) must be consummated at some point (!). Aomame is an assassin who specializes in killing men who abuse women (more shades of The Girl with the Dragon Tatoo) Even though she is a highly disciplined (ridiculously almost a super woman) professional she makes friends with a police woman with whom she hosts “intimate but fully erotic all-night sex feasts.” Her breasts are larger than Aomame’s but she is still self-conscious of them, and the two women talk about their breasts to each other and to themselves frequently.  None of this is as titillating as it sounds – or even interesting.

Next she washed the seat off in the shower. She stepped on the scale to make sure there had been no major change in her weight. Confirming in the mirror that the size of her breasts and the shape of her pubic hair had not changed, she scowled immensely. This was her morning ritual.

I don’t know if Mr Murakami knows anything about men, but I can assure you he knows nothing about women. I saw Norwegian Wood earlier this year (and enjoyed it very much) and was keen to read the novel after seeing the film, despite what I thought were very odd attitudes to sex. I looked past my own bias and accommodated thinking, I had some fresh perspective here and something interesting to see. Now, after reading the first two books of 1Q84, I don’t think Mr Murakami’s attitudes are fresh. They are pedestrian, repetitive and uninspired. The way the rape of children is treated in this series is downright odd. I’ll leave that for you to work out, but can I add my disappointment by this discovery has been great. (One lives in desperate hope for a man who will write in an honest / entrancing / interesting way about sex.) 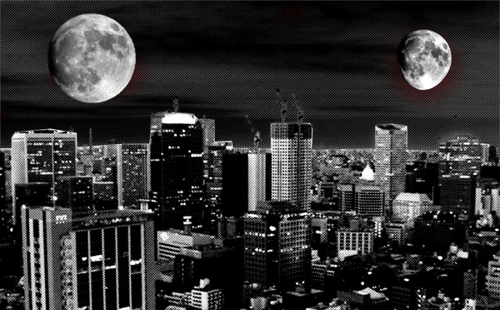 It turns out Fuka-Eri is a cult-child who has run away and believes the fantastical tale she created in Air Chrysalis. Because of his repeated abuse of children – in our parallel universe – Aomame is sent to kill the leader of this cult. The connection between Tengo and Aomeme, which has been left to simmer, suddenly comes alive to the point that Aomeme will die for Tengo. Why?  We are never told this, only that she suddenly feels this way. In a conversation she has with the Leader, Aomeme finds out some people are receivers and some are perceives. The delicate balance between them must always be maintained otherwise… we have no idea. That idea is never properly developed.

Another enormous problem I have – and I know this is a personal thing and a frequent Murakami criticism – is this hyper Westernised sell out he willingly commits. Murakami gives one a very strong impression that money and superstardom are very important to him.

Apparently Murakami wrote this over three years.  I would stake a lot of money on my “panster” theory being accurate. This novel has been belted out, but never wrestled with. This writer was thinking far more about his place in history than his novel’s treatment of time and chance. I know The Guardian have called him one of the greatest living novelists – and based on the hype I will give Kafka on the Shore a go. I don’t think I will bother with Norweigon Wood – this novel has turned me off. But Czech praise means something to me. Oh – considering I have started running again, I will read his book What I talk about when I talk about running.

All in all, this book was a sad disappointment to me when I was very excited about possibly starting a new love affair with a great voice.