Home » Film Reviews » Diary of a Chambermaid: Bunuel at his best.

Diary of a Chambermaid: Bunuel at his best.

Posted by lisathatcher on March 17, 2011 in Film Reviews | Leave a comment 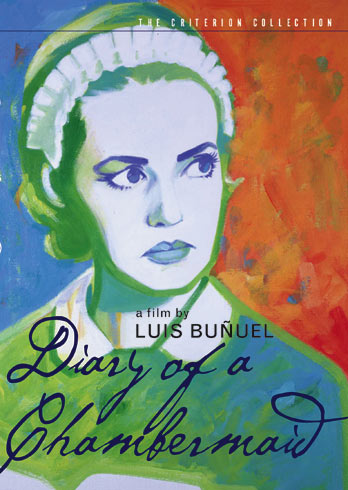 Honestly, there are times in my life (so many times seeing as ‘all’ I need is great art to propel me into ecstasy) when I am thrilled to be alive, and watching this glorious film was one of those.

I am a fan of surrealism, though most of the reasons I like it are better attributed to absurdism (I am told), I still have a soft spot for the cows heads on human form and (in the case of Buñuel) the endless (ENDLESS) chicken references.

But this – THIS – took the cake for me. Here surrealism is more philosophical than visual. The subtlety was nothing short of exciting. I love Buñuel films – I always do – but when he plays with my head rather than my eyes, I feel him as a true master.  This film is stunning and belongs to what CTEQ contributor Saul Austerlitz has called Buñuel’s “elegantly satirical, continental European sage” phase. This phase or period also includes The Exterminating Angel (1962), Belle de jour (1967), and The Discreet Charm of the Bourgeoisie (1972). Buñuel plays with familiar themes here:  The Clergy, the bourgeoisie, rationality and here, rather than playing with a theme, he foreshadows it, Fascism. Buñuel claimed not have seen Jean Renoirs 1946 version from the same source material (Octave Mirbeau’s novel) but I have read that similarities exist. I can’t imagine that is too difficult given they both used the same novel as inspiration.

Here Buñuel uses surrealism within the narrative whereas with his other films, it pounces upon us in an associational form. In other words, we have to search for the sublimated themes here, rather than have them thrust at us when (for no apparent reason) a chicken walks across the shot for no reason but to make us question the presence of the chicken.  While I enjoy those visual associations I also loved the incorporation of them here. For instance, a young cleric (played by co-scriptwriter Jean-Claude Carrière) comes to collect chapel wine from Monsieur and Madame Monteil (who along with Monsieur Rabour occupy a Normandy estate) and offer spiritual assistance to Madame. Cold (and thsi may or may not be a calculated cool imposed on her husband) to the advances of her ‘robust’ husband (whom the Priest is horrified to find is making advances upon his wife sometimes as much as twice a week) Madame requests advice from the grossly underqualified (and inappropriately excited) Priest. This conversation is interrupted when Celestine (our chambermaid) interrupts because she cannot wake Monsieur Rabour. The tone and pace of the film don’t signpost moments like these as visibly (and vividly) as they would be in later films like The Discreet Charm of the Bourgeoisie, when dining and socialising are constantly interrupted by sex and “corpses”.

The basic plotline is thus:

A stylish, very attractive young woman, Celestine (Jeanne Moreau), arrives from Paris to become chambermaid for an odd family at their country chateau. The period is mid-1930s, and the populace is astir with extremist politics, right and left. The Monteil’s household consists of a childless couple, the frigid wife’s elderly, genteel father, and several servants, including Joseph the driver/groundskeeper (Georges Géret) who’s a rightist, nationalist, anti-Semitic, violent man. The wife (Françoise Lugagne) runs a rigidly tidy house; she would like to please her virile husband physically, but cannot, due to pelvic “pain.” M. Monteil (Michel Piccoli} amuses himself by hunting small game and pursuing all the females within range – the previous chambermaid seems to have left pregnant and had to be “bought off.”

The wife’s father amuses himself with his collection of racy postcards and novels, and a closet full of women’s shoes and boots, that he likes his chambermaids to model. Their next-door neighbour (Daniel Ivernel) is a burly, retired Army officer, with a chubby maid/mistress (Gilberte Géniat), and a violent streak of his own – he likes to throw refuse and stones over the fence, to the great annoyance of M. Monteil. Celestine almost immediately finds her role in the house completely defined by the sexual proclivities of the other characters, and she proceeds to use her own considerable sexual assets to accomplish her goals.

The elderly father, M. Rabour (Jean Ozenne), is found dead in bed, dissheveled, clutching some boots that Celestine had worn earlier that evening; and Celestine decides to leave the job the next day. Previously, however, she had become motherly and protective of a sweet pre-pubescent girl named Claire (Dominique Sauvage) who visited the house; after the girl’s raped and mutilated body is found in a nearby wood, Celestine decides to stay on at the job, in order to get revenge on the murderer. She quickly finds reason to suspect the groundskeeper Joseph. She seduces and promises to marry him and join him to run a cafe in Cherbourg, so he will confess the crime to her, which he does not. She then contrives and plants evidence to implicate him in the girl’s murder. He is arrested, but eventually released for lack of solid evidence, although there is a suggestion that the real reason is his nativist political activism. Meanwhile Celestine agrees to marry the elderly ex-Army-officer neighbour, and after the marriage, we see him serving her breakfast in bed and obeying her commands. The final scene shows a crowd of nationalistic men marching past the Cherbourg cafe run by Joseph, who is shouting rightist slogans and married to someone else.

The film has a self-assured evenness of tempo that matches Celestine’s actions and movements throughout the film. She has a smooth, even sophistication and the film mirrors her actions in giving us her perspective. The specific use of black and white darkens the already mournful country-side, and builds right the way through to the final shot. The camera movement is leisurely and generally unrestricted, often including swooping crane and pan shots that for the most part take in a scene (using Franscope, a widescreen aspect ratio) rather than select it. The interior of the Monteil estate is elegantly cluttered with the paraphernalia of the wealthy – busts, mirrors, vases, lamps, objet. Madame uses the objects in her initial encounters with Celestine as a way of establishing herself as the head of this hierarchy, pointing out what is precious, what must be preserved. 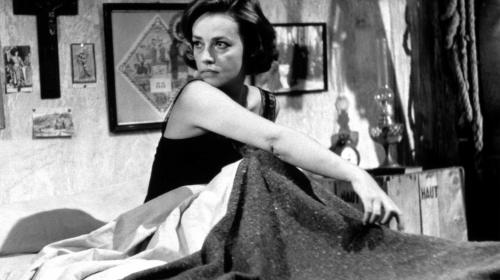 Here we have our characteristic distaste for the Bourgoisie as we have come to expect from Buñuel films. Buñuel has revealed through the manipulations of Celestine that the lower classes are smarter and more shrewd – the implication being work has made them wise. The sad petty introspection of the upper classes and its complete inability to do them any good is shown throughout the house, in their attachments to objects that ‘mean’ they ‘are’ something. Celestine herself has no times for the foibles of the wealthy, but this disdain does not extend to their goods. She wants what they have and the final scenes show her giving into the excess and the accompanying foolishness of the upper class.

It is familiar territory for Buñuel to be poking fun of the Bourgeoisie, but when you consider he is one himself, the attack takes on a kind of oedipal flavour which works completely given the way sublimated sexuality drives this narrative. Celestine has more power (and knows how to use it) than almost everyone around her because she is able to use her sexuality to advance her own position. This is a typical oedipal fantasy – the one where the male imagines the female has all the power and is in complete control of it. What is missing from Celestine’s life is rape – the threat that hangs over all women if they use their sexuality as a weapon. It is not missing from the narrative however, as Marianne is forced through her position to yield to her master when Celestine becomes unavailable. This is a tragic moment, when the woman is crying as she is ushered into the barn. Buñuel never imagines for a moment ‘all women have power’ – rather that power is attached to money and material things and a female – if she is willing to see herself as object (that is give into the opinion of others) se can use that object to advance herself. It is in the retaining of her dignity and self respect that she will lose her power over others.

Our opinion of Celestine changes throughout the film also. As she becomes craftier, we become more wary. Celestine’s advantages come from her good looks, but more than that, they come from the refinement and polish she learnt in Paris that sets her above all the people around her, even her employers. In this way she adopts the behaviours of those she disdains. Moreau never looks quite in her place and Buñuel uses her image to great effect in the film. Her black and white uniform is modified slightly in different scenes, sometimes making her look like a nurse, sometimes like the fascist regime waiting at their door. Boots and shoes are important for the same reason, adding their sexual power when the master of the house is found dead, with naked calves, clutching at the boots Celestine’s paraded before him only a few hours earlier. Boots connect the household with fascism also, and because of their fetishist qualities, is an important surrealistic image. Suppressed sexuality in this household controls everyone.  Buñuel links it to power, material acquisitions and short term gain. Not to mention silliness and naive excitability.

Of course I would talk about this film more, but you’ll be tired of reading soon. I’m always happy to chat more in the comments or on email if you are further interested in anything on this blog.  Diary of a Chambermaid is a wonderful film, rich with symbolism and exciting ideas. I hope you get as much pleasure out of it as I did.